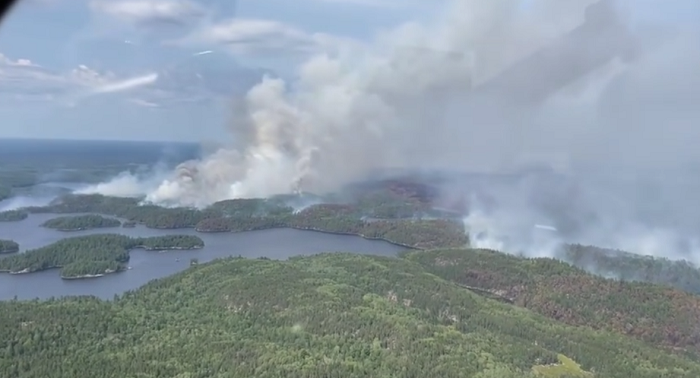 ISABELLA, Minn.  — A wildfire in the Superior National Forest of northeastern Minnesota that crews have been fighting since the weekend has grown to 6 1/4 square miles, but U.S. Forest Service officials said Thursday morning that it grew little overnight.

The fire near Greenwood Lake, about 25 miles southwest of Isabella, was first spotted Sunday. It grew from 5 square miles to 6 1/4 by Wednesday evening, after what officials described as a “very active” afternoon of expansion on its western flank.

But in an update posted Thursday morning, Forest Service officials said there was no significant change overnight, which is often the case with forest fires. Thursday’s forecast in the area called for continued hot, dry weather, with thunderstorms expected Friday night and Saturday.

The fire led authorities to evacuate around 75 homes Monday near McDougal Lake, just north of where the fire started. Many dwellings in the area, which is deep in the forest, are seasonal cabins. Some small portions of the Boundary Waters Canoe Area to the north and northeast have been closed as a precaution due to the blaze and two smaller fires spotted over the weekend in the wilderness. No injuries and no damage to structures have been reported.

Crews are also fighting several smaller wildfires in northeastern Minnesota. Meanwhile, a series of explosive blazes propelled by gusts that have torn through Northern California mountains and forests.

On Thursday morning, officials confirmed that lightning was the cause of the Greenwood fire.

A public meeting will be held Thursday night at the Wolf Ridge Environmental Learning Center auditorium at 6282 Cranberry, Rd, Finland, MN 55603 at 6:00 pm. The meeting will also be available virtually on the Superior N.F. Facebook page.