FINLAND, Minn.– The Greenwood fire has grown to more than 10 thousand acres, burning through the Superior National Forest, and it is still zero percent contained. The Fire is expected to jump over Highway 1 soon, which might mean new evacuation orders for those in the fires path. 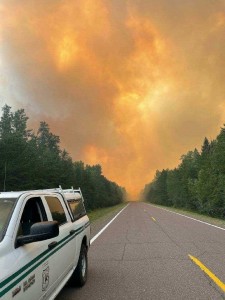 As of Monday, the fire broke out in two new areas, one on the North East side, near where Lake County Highway 2 meets State Highway 1. The South East side is expanding up the Greenwood River towards the McDougal lake.

Evacuations up through Lake County have occurred, but more might be on the horizon.

“We’re going to have to just wait this out and have to see where the fires going and if we have to do any more evacuations, we’ll pull the plug on that,” Larry Bickel, Public Information Officer for the Eastern Area Incident Management Team said.

Air support is scouting the burn area now as it expands with the wind from the South West, and fire crews are being moved toward safety zones as the air crews are out to survey the scene.

Officials held a informational meeting for the public on Monday evening to update residents on the latest containment efforts and predictions of where the fire may spread.

“The firefighters have to have a safety zone and what we did is we build those first and whenever something like this happens, we get them back to the safety zone,” Bickel said.

One concerned homeowner in the area says he’s never seen smoke like this, which is why he stopped by the Finland Community Center for more information. “As soon as I started driving up the hill, I could tell by the mushroom shape of the clouds that there was definitely a fire going on and probably a big one,” Roger Seeling said. 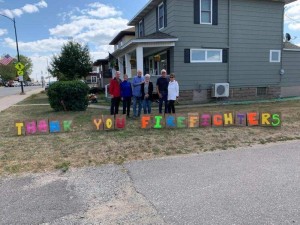 Roger and other community members are coming together as the fire continues, but it is the help from each other that is helping them pull through and stay informed.

“To develop that togetherness and working together well get over this, the volunteer fireman, the community, the state, the federal government, we’re all working together and I think we’ll get through it,” Bickel said.

For those who live in the area, the fire’s destruction and poor air quality are serious concerns, but some are still hoping for the best, “there’s a lot of people who love this place and the people who live here, and I just hope that things go well for all,” Seeling said.

Temporary flight restrictions for both planes and drones has been instated over the area as flight crew continue to survey the scene.