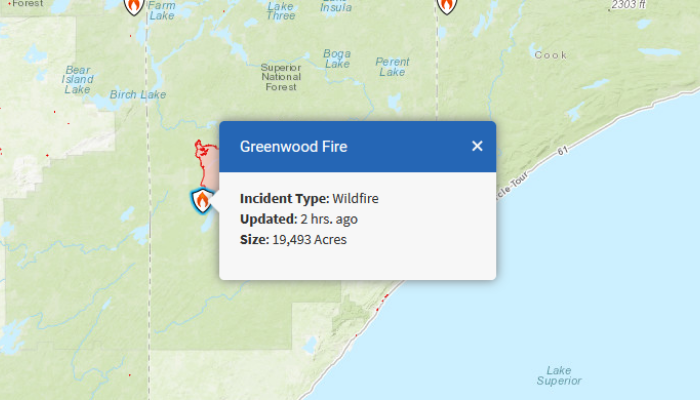 ISABELLA, Minn.  – The Greenwood fire has grown to approximately 19,493 acres, according to the National Wildfire Coordinating Group.

As of Monday evening, the fire was zero percent contained and was expected to jump over Highway 1 causing new evacuation orders for those in the fire’s path.

The fire had also broken out in two new areas, one on the North East side, near where Lake County Highway 2 meets State Highway 1. The South East side is expanding up the Greenwood River towards McDougal lake.

The fire had grown to more than 10,000 acres Monday which was mostly unchanged from Sunday night.

The Greenwood Lake fire is one of several fires burning within the Superior National Forest. They prompted the closure of the Boundary Waters Canoe Area Wilderness on Saturday for the first time in 45 years.

According to the Cook County Sheriff’s Office, while there is currently no evacuation order for the Gunflint Trail, Gunflint fire personnel are alerting people along a northern portion of the Gunflint Trail to “get ready” for potential evacuations because of growing wildfires in the BWCAW.

Today, U.S. Forest Service officials say firefighters will return, as conditions allow, to areas impacted by the fire yesterday. They will assess fire progression and size after yesterday’s run and engage to protect structures where it is safe to do so.

Operations will update suppression plans based on the fire growth. Crews with heavy equipment will reinforce the southern portion of the fireline as an anchor point as well as the Highway 1 and County Highway 2 corridors.