No injuries have been reported so far. 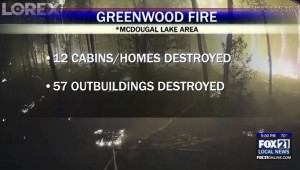 The Greenwood Fire’s devastating destruction became very real Wednesday evening as officials released how many structures were damaged or destroyed in the McDougal Lake area.

According to the Superior National Forest Service, the Cook County Sheriff’s Office has counted 12 cabins and homes destroyed by fire and nearly 60 outbuildings, like sheds, also destroyed.

Three other primary structures, like cabins or homes, suffered some damage.

It was not immediately known how many structures were saved.

No injuries have been reported so far.

The Greenwood Fire has grown to roughly 22,000 acres so far.

For the latest on the firefighting efforts, click here.