Due to the amount of debris and the building's structural concerns, streets will remained closed to vehicular traffic over Saturday night. 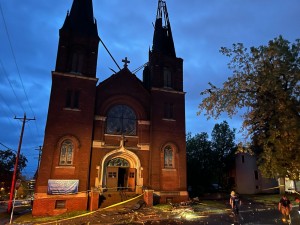 DULUTH, Minn.- A lightning strike damaged both a Duluth church and a nearby water main during thunderstorms Saturday night, and officials are monitoring the structure overnight.

According to a spokesperson with the Duluth Fire Department, at approximately 7:45 p.m., crews responded to Hope City Church at 417 North 3rd Avenue East, after a recording party said that the church had been struck by lightning.

On arrival, crews found a large amount of debris in the street in front of the church on East 5th Street. Crews did not see any smoke; however, the western steeple that was hit was severely damaged and has been reduced to its frame. 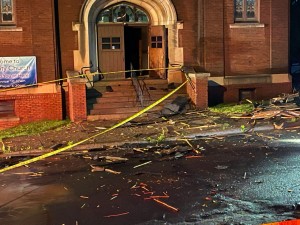 Crews found no fire or smoke within the building. Additional crews found considerable roof damage that has impacted the structural intent of the building.

While crews were searching the building, the Duluth Police Department noticed a large amount of water coming down North 3rd Avenue East. Upon further review, they found a water main had broken from the impacts of the direct lightning strike.

City of Duluth Utility Operations crews shut down a portion of North East Third Street between East 5th and East 4th Street to repair the break.

Due to the amount of debris and the building’s structural concerns, East 5th Street between North 3rd Avenue East and North 2nd Avenue East remained closed to vehicular traffic over Saturday night.

It is expected that once the water main break on East 3rd Street has been repaired, that North 3rd Street between East 5th Street and East 4th Street will also be closed to vehicular traffic until further notice.

“The building will be uninhabitable until a structural engineer can determine if any part of the building can be used and what the plan will be to repair it,” said Wendy Rannenberg, City of Duluth Building Official.

“Upon arrival, debris was scattered,” said Assistant Chief Clint Reff. “It looked like a bomb had exploded.”

Fire officials estimate damages to be valued at $185,000.

Police: Man Who Broke Into Wisconsin Home Wanted A Bath