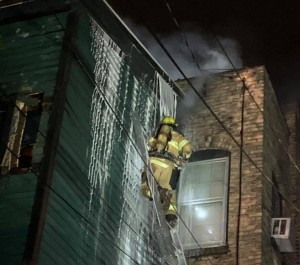 According to a spokesperson with the Department, the call came in just after 10:30 p.m. of a structure fire at a nine-unit apartment building on the 1100 block of East 3rd Street.

The reporting party told dispatch that smoke was coming from the back of the building in an exterior staircase that was enclosed.

At the scene, crews saw tenants evacuating the building, as smoke and flames came from the first and second windows in the exterior stairwell.

One tenant who made it out shared concerns about her two cats still inside.

During a primary search, crews located a total of five cats in three different apartments. Three cats were sheltered in place during the fire, and two additional cats were pulled out during the secondary search.

As they continued attacking the fire from the rear, additional crews began overhauling the exterior stairwell and its ceiling. Overhauling continued until the fire was extinguished, around 1 a.m. Sunday.

No people or pets were injured during this incident. Firefighters checked on the three cats that remained in their units after the fire, and all were okay and reported to be happy to see their owners.

Damage is estimated to be $80,000 to the structure. Multiple units experienced smoke damage from the fire.

One tenant has been displaced due to water that came into their unit.