DULUTH, Minn.- Around 7:45 p.m. Saturday, lightning struck Hope City Church in Central Hillside, causing a cross made up of wood and metal to fall and even broke a water main underneath the structure.

The lightning bolt destroyed one of two steeples sitting on top of the church building, with force strong enough to reach below the concrete, causing a water main to burst into the street.

“They noticed the ground next to the church right in the street there started heaving, started bubbling up, and water started coming out.,” said Duluth Fire Captain Mike Consie. “What that is, is just that the water, you know, the water main breaks, and there’s so much water rushing out there that it’s just going to push up the ground, finding its way out.”

Parts of North 3rd Avenue East and East 5th Street remain closed off due to the broken pipes. Officials say the damage on the church’s roof is making the structure unsafe for its members to return. 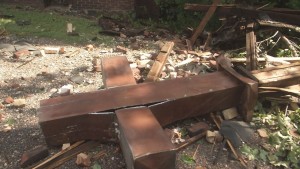 “Obviously, knowing that there’s a significant amount of damage so with those kinds of reports, we make sure that our fire marshall and safety prevention division knew about it, and they had some of their people show up,” said Consie. “They deemed that the structure was not safe for the public to be around.”

People in the Central Hillside neighborhood saw, felt, and heard the effects of Saturday night’s storm. One resident who lives across the street from Hope City witnessed the lightning strike at the place of worship.

“I was standing on the second floor of my house,” said Theresa Neo. “I was looking out the window to see the storm, and I heard and saw the lightning, and then I was this plume of smoke with like embers flying through the air.”

Despite the circumstances, church members came together for Sunday morning service at a nearby park.

“I got the call last night and just was in a bit of shock–surprised, but was never worried,” said Pastor Mark Pavola. “We just bought this building less than six months ago, and we’ve been doing service in here–but our heart is for the community.”

Duluth Public Works is continuing its efforts to assess the damage.