Larson brought her proposed general fund budget of $97.1 million dollars for next year before council.

“I have always believed that budgets are moral documents. Every single Duluthian needs to know that, in some way that is meaningful to them, we are in their corner,” Mayor Larson said. “There is no more important way to show this, and to show up, than through our budget.”

The General Fund is made up of revenue from property taxes, city sales tax, local government aid from the state, and other sources.

In Mayor Larson’s 2022 Budget Proposal she proposes a property tax levy increase of 6%. This is almost double the 2.98% levy increase in 2021.

The Mayor says using $4 million in general fund reserves keeps the 2022 levy increase from getting higher due to the financial pains caused by the pandemic.

“I don’t like to cover or subsidize city general operations through our savings – it kicks the can down the road,” said Larson, “But in the case of a global pandemic, and the uncertain associated impacts at this time last year, it was just the right thing to do.”

Larson says because of property tax value growth and new construction growth, and by utilizing some American Rescue Plan funding, the net property tax impact after growth that homeowners will see is a little more than 1 percent. 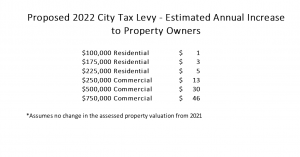 Larson’s breakdown of what taxpayers would see with her proposed levy.

Meanwhile, Second District Councilor Joel Sipress said those numbers are only accurate if a property owner is not reassessed.

“And so where when we look at what the actual impact will be on people I think it’s accurate to say that the typical taxpayer’s going to see a 5% increase from this levy and not a 1% increase because really it’s only the new construction which is paid in a way other than people’s taxes going up,” he said.

Mayor Larson also acknowledged the various city departments including Duluth Police and Fire, are able to articulate the need for more staff.

Her proposed budget does not increase staff numbers, but it does not cut any staff either.

“This proposed budget expects to keep our year-round staff numbers at around 870, give or take, with seasonal workers adding to that number,” said Mayor Larson. “More than ever, we need all hands on deck to help our community recover.”