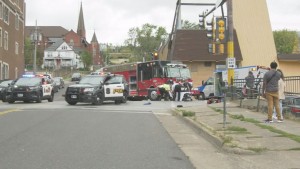 DULUTH, Minn. — A 39-year-old male bicyclist is being cited for violating traffic laws after slamming into a vehicle at an intersection in downtown Duluth.

The accident happened around 12:30 p.m. Monday at the intersection of 2nd Avenue West and 2nd Street.

“The bicyclist had disregard for the intersection, ran the red light and hit the side of the vehicle,” according to Mattie Hjelseth, public information office for the Duluth Police Department.

The bicyclist was not wearing a helmet and was transported to a local hospital for minor injuries.

“The individual on the bicyclist will be cited with a semaphore violation,” according to Hjelseth.