Minnesota on Track for Most Traffic Deaths Since 2007 If Driving Doesn’t Improve, Officials Say

There have been 401 traffic-related fatalities since Jan. 1, the earliest the state's reached 400 since 2007.

DULUTH, Minn.- The Minnesota Department of Safety reporting a scary milestone on Minnesota highways — 401 deaths as of Monday. They’re calling for drivers to shape up, as this year is on track to be the deadliest on the state’s roads in 14 years.

“There are some people who are afraid to go out and use that roadway because of what’s going on,” said Mike Hanson, Director of the Office of Traffic Safety at DPS. “Everybody needs to start talking about this as a critical public safety issue because that’s exactly what it is.”

From jail in a PSA video, truck driver Sam Hicks recounts a distracted driving crash in Minnesota, which took the life of another driver back in 2018.

“During those 8 seconds, that time went by so fast, I traveled a lot farther than I ever thought I would’ve,” he said. “I looked up just before I hit the vehicle. And my truck went right on top of his car.”

Three years later, the problem hasn’t gotten any better. “I’m not sure I have the right words to describe how frustrated I am, where we are right now,” said Hanson.

Public Safety officials say the pandemic and stay-at-home orders were huge factors in the driving behaviors that led to 401 deaths, and it’s the same nationwide.

“It’s like the social fabric is tearing and we forget that our transportation system relies on all of us cooperating with each other,” Hanson said.

Most of the 401 have been speed-related. “The selfish and, decision that a driver made to consciously exceed that speed limit,” said the Traffic Safety Director. 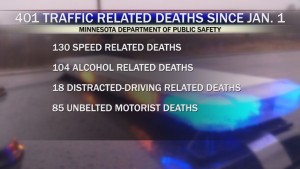 130 of the deaths have been due to driving at a high or reckless speed. 104 are due to alcohol, 18 are due to distracted drivers, and 85 are unbelted motorist deaths.

Meanwhile, safety officials say they are tired of having to deliver the tragic news to loved ones. “It’s very tragic,” Lt. Robin Roeser with the Duluth Police Department said. “Especially the ones that are unavoidable, it’s just tragic.”

“The devastation that is left behind, the families that now have a gaping hole or more than one in some cases it’s just, it’s horrific,” Hanson, himself a State Trooper for 33 years, said.

At this rate, according to Hanson, the state is on track to see 475 deaths soon — the highest yearly total since 2007.

Yet, he said that can be avoided. “It’s really as much about education and outreach, and having people learn how to make better, safer decisions that’s going to solve this problem for us.”

He said DPS is working with the Minnesota Safety Council for a program with an effort from employers, as part of the “Towards 0 Deaths” program.

“It’s not going to be writing tens of thousands of speeding tickets,” said Hanson, “but that will be part of it,” Hanson said.

“We don’t have to lose almost 500 Minnesotans this year on our highways,” Hanson said.