Blatnik Bridge Commute to Duluth Diverted for at Least a Year

Crews have also installed a temporary traffic light at the intersection of Garfield Avenue and Railroad Street to help control the added traffic.

DULUTH, Minn.- Some big road closure signs are dotting the Blatnik Bridge as you drive into Duluth, as the Twin Ports Interchange or Can of Worms reconstruction project will divert traffic onto the Garfield Avenue exit for at least the next year.

A big light-up sign greets drivers getting on the Blatnik in Superior, warning them of the big change to their commute up ahead.

According to Pippi Mayfield, Public Engagement and Communications Director for MnDOT, drivers are encouraged to head back to the roundabout and get onto the Bong Bridge to cross the lake.

“We know that the locals will find the best route for them, we can only encourage people to take the easier route like the Bong,” said Mayfield, “and hopefully people who don’t know Superior or Duluth as well, like our visitors, they will use the sign detour which is the Bong Bridge.” 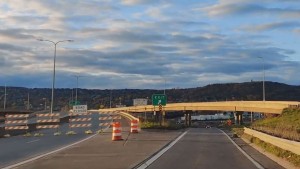 Crews have also installed a temporary traffic light at the intersection of Garfield Avenue and Railroad Street to help control the added traffic there.

The change, of course, is due to the Twin Ports Interchange or Can of Worms project. MnDOT says it’s the last big traffic change after reducing I-35 to one lane. They will now continue demolishing and beginning rebuilding all the ramps.

Mayfield asked drivers to bear with them over the next year or so. The traffic hassles and changes will all be worth it when ramps and highways in the interchange project are improved, which they estimate will be the summer of 2024.

“As you can see driving through there we’ve already began demolishing a lot of them. But well start rebuilding them now and have a bunch open next year,” Mayfield said. “Sticking it out for another year or two with us and all the ramps will be open and it’ll be a beautiful finished product in the end.”