A cat let loose outside of a car prompted a day-long search and renewed calls for the proper drop-off of animals.

DULUTH, Minn.- Duluth’s Animal Allies Humane Society is used to seeing animals brought in, but not animals jumping out of a car in their parking lot. That’s how one person dumped a cat there Tuesday, prompting staff to plea for people to properly drop off animals.

In surveillance video, around 11:45 a.m. Tuesday, someone just pops open a door, lets a black and white cat out with no warning, and drives off.

“This has been a trend that we’ve been seeing a little bit more of,” said Nicole Facciotto, Humane Education Manager, “and often times the animal is at least in a crate or something like that.”

“Extra unfortunately, the cat was loose and has yet to be found,” she said early Tuesday evening.

According to Facciotto, this year they’ve seen almost half a dozen dumped animals. Just last week, a crate of guinea pigs was left on the doorstep.

“So when people leave us things like Guinea Pigs, we’ve had Rabbits, those aren’t things that we’re properly equipped to care for,” said the Humane Education Manager. “But there are a lot of small breed rescues in our area that we can very easily direct people to if they need placement for those types of animals”

Not only is there support available for people looking to get rid of pets other than cats and dogs, but abandoning animals is a misdemeanor crime in the state of Minnesota.

Facciotto said they sent the footage and the person’s license plate number to authorities so they can hold the driver responsible.

So the entire shelter staff still isn’t sure why people are making that choice.

“We’re not sure if it’s due to people thinking maybe they’ll be judged for needing to give up an animal, that there’s a fee associated with it that they can’t afford,” Facciotto said. 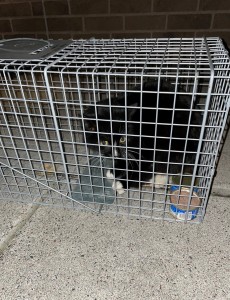 Since they are a nonprofit, there are fees associated with turning in pets. But they have payment plans, grants, and other forms of assistance – which people would find out about if they came inside with their animal.

To find the rogue cat, they set up live traps around the property. Thankfully it was spotted throughout the day, but nothing stopped it from running into trouble with rice lake road running right alongside.

“It’s a really dangerous situation for animals up here,” said Facciotto. “We have a lot of woods which is where the cat kind of immediately ran to, it’s pretty difficult. We are very close to a busy road.”

The story does have a happy ending. Around 9 p.m. Facciotto said the cat was found safely, and she seems like a very sweet girl. But that might not be the case if something like this happens again in the future.

So they ask pet owners looking to put up dogs or cats for adoption to please bring them in, so they can get checked and get any needed shots.

That way they ensure the animals can live life in the shelter or in a new home — not on the run.

“Really ensure that we can give the best care and adopt out healthy, happy animals,” said Facciotto.

New Veterans Memorial Park to be Built in Rice Lake