According to a spokesperson with the Duluth Police Department, a 46-year-old woman experienced a medical condition while driving on Maple Grove Road and lost control.

DULUTH, Minn.- A scary afternoon at the Miller Mall Car Wash in Duluth as they’re left with a literal gaping hole after a vehicle crashed into their building at a high rate of speed.

According to a spokesperson with the Duluth Police Department, a 46-year-old woman experienced a medical condition while driving on Maple Grove Road away from the Target.

She lost control of the vehicle, crossed over the Highway 53 median, and slammed into the Miller Mall Car Wash building. 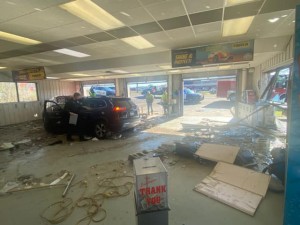 The woman was sent to a local hospital with non-life-threatening injuries.

Two dogs were in the vehicle. One was transported to an emergency vet. The other died on-scene.

Car Wash owner Payton Sullivan said thankfully, none of his employees or customers were injured — but that could have easily not been the case.

“Right in this area we always have one or two details that we’re working on,” said Sullivan, pointing to the parking spots right in front of the hole in the wall. “Just happened to be that nothing was parked here at the time. So there could’ve been 3 or 4 employees with the customers in the area that easily could’ve been hurt by this.”

“I mean, there could’ve been somebody walking on that sidewalk at the time, y’know? So very fortunate today that this was all that happened, was some building damage and some equipment damage,” he said.

Workers spent the day boarding up the hole and cleaning the debris inside. Some equipment and the newly-redone floor were damaged, though Sullivan said he doesn’t have an estimated cost yet.

According to the owner, Miller Mall Car Wash will be back open Sunday at 10 a.m.