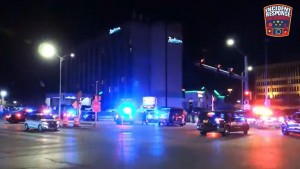 WAUWATOSA, Wis. (AP) – Police in Wisconsin say a shooter wounded two officers as they investigated a report of shots fired inside a hotel.

Wauwatosa police say in a news release that the officers responded Saturday night to the Radisson Hotel.

Witnesses and guests told the officers that gunshots had come from the 2nd floor.

The officers were shot when they went to investigate. Both sustained non-life-threatening injuries.

The suspect has been arrested but was not immediately identified. Additional officers performed a sweep of the hotel and no other injuries were reported.

The Milwaukee Area Investigative Team will handle the investigation.