John D'Auria started the show to honor his cousin and Twin Ports breakdancing pioneer, Willie Kruger, who died in 2010.

DULUTH- Minn.- A decade of dance comes to an end in the Twin Ports, as the Willie Kruger Dance Competition brought the community together for one last dance in honor of the local breakdancing pioneer.

“10 years with a competition that in the beginning that nobody thought that I could even get past one year by mixing all styles of dance together and making them come from different walks of life,” said Founder John D’Auria.

10 years of bringing youth from all backgrounds off the streets to channel their energy and talent in a healthy way on the dance floor.

“It’s all about dancing and nothing else matters,’ Amanda Durst said.

“The community is, accepted this over the years and they’re happy with what I brought to them so at the end of the day that’s what it’s all about,” he said.

D’Auria started the show to honor his cousin and Twin Ports breakdancing pioneer, Willie Kruger, who died in 2010. 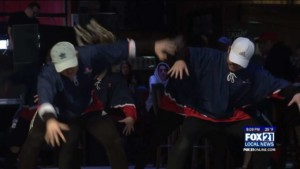 The 7th Annual Competition at the Sports Garden in 2018

“I still go to his grave every year before the competition and I lay the new poster, the new flier on his grave and we have a conversation,” said D’Auria. “In my mind, we kind of laugh and I say this, it’s got your name on it, man! You’ve gotta bring me the dancers otherwise it’s unsuccessful!”

Throughout the years the show took over Grandma’s Sports Garden, before moving to the Encounter Youth Center downtown in 2019.

Members of the Kruger family were present for the last show. They say it’s been a great way to represent the many diverse styles of dance from jazz to hip-hop, learned in schools or mastered on the streets — just like Willie did.

“I don’t think he would’ve ever thought that he would’ve had that impact, but it’s really cool to see it happen,” said Lyndsey Smith, Willie Kruger’s daughter.

“I think there needs to be more events like this because there’s definitely a lot of talent here that’s not normally showcased,” she said.

The show took last year off due to the pandemic, and D’Auria says covid also caused fewer participants to sign up this year.

“It’s not about how many dancers it’s about the community coming together as a whole,” he said.

Among those who did get on the floor this year were dancers who owe a lot to the competition.

Every year the best group and solo dancers of different ages are judged and awarded with trophies and cash prizes based on their skill and presentation.

“Gotta get the crowd moving, gotta get the people loving it,” Judge Billy Boykin said. “Good dance style with the music that you got, staying on your feet keeping everything moving and grooving.”

The three judges this year were past champions. But they were all united in how much they will miss the experience. “It’s kinda going to be weighing heavy on the heart, to say goodbye to the competition,” said Boykin.

“It made so many dreams come true, it made my dreams come true being on a big stage like that seeing everybody smile, all the kids and adults have fun dancing,” he said. “It’s gonna suck to see that go.”

And D’Auria said it’s the dancing family that makes this year’s last dance the perfect tribute to Willie.

“The dancers are what make this show successful,” he said. “They come here and they represent him with their dance every year and I truly appreciate that.”