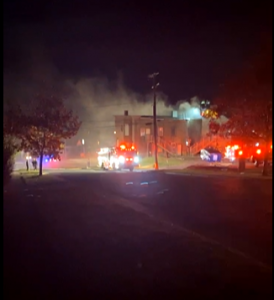 Still from a Facebook Video taken by viewer Joel Heller.

According to a spokesperson with the Duluth Fire Department, crews responded to a passerby noticing smoke from the second story of a multi-unit apartment building on the 600 block of East 4th Street just before 9:30 p.m.

When crews arrived, there was “a moderate amount” of smoke showing from the second story.

Crews began attacking the fire from the outside. then the seat of the fire was located in the basement. They repositioned lines and began the firefight there.

Eventually, the fire called for a second alarm for more manpower. In total, crews from six stations responded to the fire Friday night.

Rescue crews conducted primary and secondary searches of the first and second floor which resulted in an all-clear.

The main body of the fire was knocked down, and firefighters began checking for extensions. Holes were made in the roof to provide ventilation, the spokesperson said.

Crews then began extinguishing hot spots and put out the fire that had extended to the ceiling structure.

Three tenants living in the building at the time of the blaze were evacuated.

Officials said a total of six adults, four children, and a dog were displaced due to fire and smoke damage in each unit. All three units are being assisted by the Red Cross.

Meanwhile, during the fire multiple cars ran over fire hoses that were being used. According to the Duluth Fire Department, this could be detrimental for those who are on the other end of that hose line.

“It is dangerous to run over a fire hose at any time but extremely dangerous during fires,” Assistant Chief Cint Reff said. “Firefighters are on the other end of that hose which is their lifeline. Running over a hose could not only break the hose line, it could also be detrimental for those who are working to put out the fire.”

“If you are in the area while a fire is being fought, please do not run over hose lines. We ask that you instead find a detour and not put additional lives at risk,’ the Asst. Chief said.

Minnesota Power was called to the scene and turned off power to the building.

No one was injured during the fire. The Duluth Fire Marshal’s office is investigating.