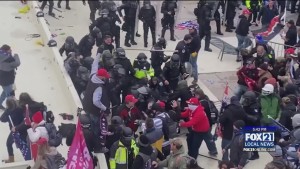 MADISON, Wis. (AP) – A federal judge has sentenced two Wisconsin men to probation for joining in the Jan. 6 insurrection at the U.S. Capitol.

The Wisconsin State Journal reports that 29-year-old Brandon Nelson of Madison and 24-year-old Abram Markofski of La Crosse pleaded guilty in September to a misdemeanor charge of parading, demonstrating or picketing in a Capitol building.

Both appeared by video in federal court in Washington, D.C., and said they were sorry.

Their attorneys have argued there’s no evidence either of them committed any acts of violence or destruction.