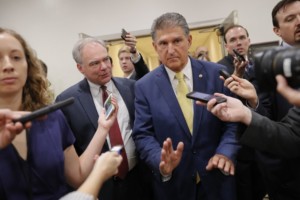 WASHINGTON (AP) – Sen. Joe Manchin says he can’t back his party’s signature $2 trillion social and environment bill. That would deal a seemingly fatal blow to President Joe Biden’s leading domestic initiative heading into an election year when Democrats’ narrow hold on Congress was already in peril.

The West Virginia senator said on “Fox News Sunday” that after months of negotiations, “I cannot vote to continue with this piece of legislation.”

His words suggest he might be open to continued talks. But he all but said it would have to meet his demands for a smaller package, which would be hard for many Democrats to accept.

The White House calls Manchin’s announcement “a sudden and inexplicable reversal in his position.”