The multi-use building will include a public marketplace in the street-level drill hall and the lower level -- a community kitchen for nonprofits and small businesses.

DULUTH, Minn.- The stars of a vision, plan, and developers have aligned to bring new life to the Duluth Armory, as its redevelopment was announced via press conference Monday, inside the building which has sat largely unused on London Road for decades.

“They say good things come to those that wait, and if that’s true the Armory project is going to be amazing because we’ve waited 20 years to get to this point,” said Mark Poirier, Executive Director of the Armory Arts and Music Center.

Sherman Associates — no stranger to historic preservation after re-vamping the Norshor Theatre downtown — signed on to helm the project, expected to start construction in late 2022.

President George Sherman was approached about the historic cultural landmark 18 years ago but said he didn’t see the vision then. “The business environment had to be right for it we needed to have the right concepts that could come together and reinforce each other.”

Now, he said the need and the time were right. “We were able to save the NorShor Theater and make it a very vibrant theater community. We’re going to undertake the same workload the same energy, creativity, and capital to make this project come to life.”

Perhaps most well known as a performance venue for music legends like Bob Dylan, and where music legend Buddy Holly performed one of his last conce 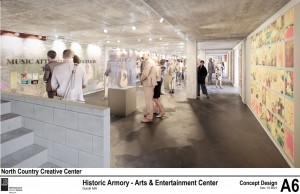 rts before his death, officials hope to keep the entertainment spirit alive.

Plans include a museum space to honor Bob Dylan called the North Country Creative Center, among others.

The multi-use building will also include a public marketplace in the street-level drill hall and the lower level — a community kitchen for nonprofits and small businesses.

There are also talks to make the Armory the new location of the Music Resource Center, an after-school music education program for area education teens currently operating in a nearby facility.

“We hope to bring the Duluth Armory back to life, to its history of being a center point for all of Duluth,” Sherman said.

Along with being a performance venue, since it was built in 1915, the building has gone through being an armory for the National Guard and a refuge center during the Cloquet Fire of 1918. 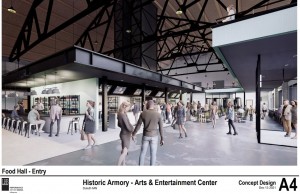 In the past 20 years, it was on the brink of demolition, saved by a $5 million investment by the Armory Arts and Music Center to fix foundational issues such as the crumbling concrete floors in the Drill Hall.

The $25 million redevelopment will be paid for with federal funding, tax credits, and requesting a state general fund grant of $7.5 million for infrastructure improvements.

“Every single neighborhood deserves something like this,” said Duluth Mayor Emily Larson. “Not everyone has a shell like this we get to work with.”

Developers hope the 100-year-old building will serve a new purpose for the next 100 years.

“The armory is going to be full of entertainment, music, and vibrancy,” Sherman said.

According to Sherman, developers hope the doors to the new and improved Armory will open in June of 2024.