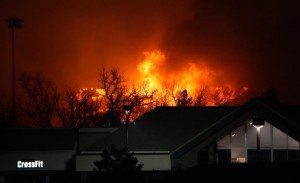 Flames explode as wildfires burned near a small shopping center Thursday, Dec. 30, 2021, near Broomfield, Colo. Homes surrounding the Flatiron Crossing mall were being evacuated as wildfires raced through the grasslands as high winds raked the intermountain West. (AP Photo/David Zalubowski)

DENVER (AP) – An estimated 580 homes, a hotel and a shopping center have burned and tens of thousands of people were evacuated in wind-fueled wildfires outside Denver.

Boulder County Sheriff Joe Pelle says only one injury has been reported, but didn’t rule out finding out later about more severe injuries or death.

The wildfires engulfed parts of the area in smoky, orangish skies on Thursday.

The city of Louisville, which has a population of about 21,000, was ordered to evacuate after residents in Superior, which has 13,000 residents, were told to leave.

The neighboring towns are roughly 20 miles northwest of Denver.