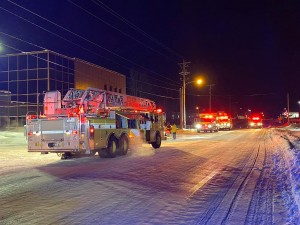 HIBBING, Minn.- L&M Radiator in Hibbing was damaged by a fire and subsequent smoke late Friday.

According to the Northland FireWire, the Hibbing, Chisholm, Keewatin, and Virginia fire departments were dispatched to a fire alarm at L & M Radiator on 37th Street in Hibbing. The alarm was reported around 7:30 p.m.

Arriving Hibbing firefighters discovered a fire in a paint booth inside the production area of the facility. The fire was quickly extinguished although a large part of the building was filled with smoke.

Damages were estimated at around $5,000.

Hibbing and Keewatin firefighters were on the scene while the Chisholm and Virginia fire departments were cancelled en route.

The cause of the fire is under investigation. Hibbing fire officials say the building’s sprinkler system kept the fire contained to the paint booth area.