Smoke from this fire did affect traffic along the Blatnik Bridge, which was closed in both directions for nearly two hours.

It is advised to use the Bong Bridge on Superior’s west side to avoid any travel issues.

Superior Mayor Jim Paine shared on Facebook that the fire may be too large to put out, so it may be a while before the area is safe. 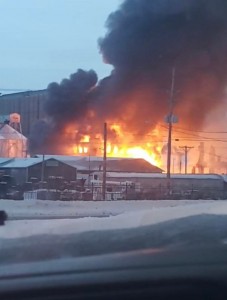 This is a developing news story. It will be updated as more information becomes available.