Everyone was reported safely outside. 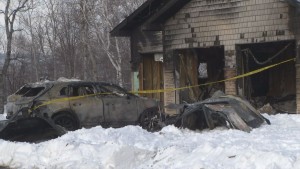 SUPERIOR, Wis.- Superior Fire Department crews responded to a structure fire early Saturday morning, which destroyed the vehicles inside, though no one was injured.

According to a spokesperson with the Fire Department, crews arrived at the home at 4 Bridgeview Drive around 8:20 a.m, to find a fully involved three-stall attached garage with a large amount of fire coming out of the overhead doors and smoke showing from the home.

Everyone was reported safely outside. Fire crews attacked the fire through the garage doors while ventilating to prevent the fire from spreading into the home.

“Significant water and foam,” the spokesperson said, was used to extinguish the fire. Crews were on scene until 11 a.m.

The vehicles in the garage were a total loss, and the garage suffered significant damage. However, according to the spokesperson, the home suffered only light smoke damage, save for the areas connected to the garage.

Damage is estimated at approximately $150,000. The two occupants of the home are staying with friends until it’s safe to move back in.

It’s been a busy week for the Superior Fire Department, as this is the 2nd fire in just two days after the massive blaze which brought down two historic Superior warehouses.