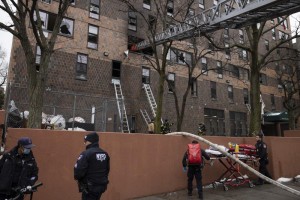 NEW YORK (AP) – Nineteen people, including 9 children, have been killed in an apartment fire in New York City in one of the worst blazes in decades.

Dozens of people were injured in the Bronx fire, and at least 13 people were still in critical condition.

According to the FDNY, approximately 200 firefighters responded to the scene.

Fire Commissioner Daniel Nigro said the fire “started in a malfunctioning electric space heater” in an apartment unit spanning the second and third floors of the 19-story building. The door of the apartment was left open, allowing smoke to quickly spread throughout the building, Nigro said.

Some residents, trapped in their apartments, broke windows for air and stuffed wet towels under their doors. One man rescued by firefighters said he’d become numb to fire alarms because of frequent false alarms.

Some residents “could not escape because of the volume of smoke,” Nigro said. Firefighters “found victims on every floor and were taking them out in cardiac and respiratory arrest,” he said, calling it “unprecedented.”