DULUTH, Minn. – You can thank a Duluth K9 for catching a burglar in the act. 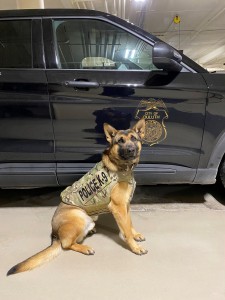 The crime went down around 3 a.m. Wednesday at the 27 Liquor store located on the corner of 27th Avenue West and Michigan Street.

When officers arrived, they found a 27-year-old man on the roof.

But while the officers were surrounding the building, he got inside and refused to come out.

That’s when Officer Josh Aubart and his K9, Vili, were called in to handle the situation.

And guess what?   That burglar crumbled and was arrested on pending charges of burglary, theft and damage to property.

FOX 21 names suspects after they are formally charged.