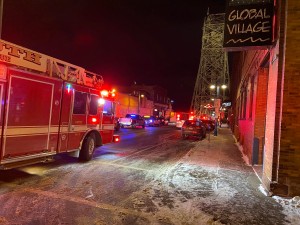 DULUTH, Minn. –   The Aerial Lift Bridge was temporarily shut down Thursday evening after authorities said someone climbed to the very top of the structure.

The city alerted people to stay away from the area around 7 p.m.

“We are asking the public to stay away from Lake Avenue and Morse Street while we provide assistance to the individual. The Aerial Lift Bridge will be closed until further notice,” said Mattie Hjelseth, public information officer for the Duluth Police Department. “Emergency services will still be accessible to individuals on Park Point.”

Duluth police officers and firefighters were on scene to try to communicate to the person who climbed up top, according to Hjelseth.

Their efforts were eventually successful with the person being helped to safety without injury around 8:15 p.m.

Career Lab in Duluth Reopens to the Public