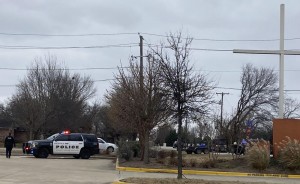 COLLEYVILLE, Texas (AP) – Police say one hostage has been released uninjured from a Texas synagogue where a man had been holding four people.

He was expected to be reunited with his family soon and did not require medical attention.

FBI crisis negotiators were continuing to communicate with the man who took the hostages at Congregation Beth Israel near Fort Worth.

Services at the synagogue were being livestreamed on Facebook before the feed cut out.

There have been no reported injuries.

An official told The Associated Press that the hostage-taker has demanded the release of a Pakistani neuroscientist suspected of having ties to al-Qaeda.