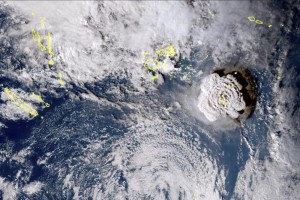 WELLINGTON, New Zealand (AP) – An undersea volcano has erupted in spectacular fashion near the Pacific nation of Tonga.

The eruption on Saturday sent tsunami waves swirling around buildings and people rushing to higher ground.

There were no immediate reports of injuries or damage because all internet connectivity with Tonga was lost.

Following the eruption, a tsunami advisory was issued for Hawaii, Alaska and the U.S. Pacific coast.

Authorities in Southern California closed beaches and piers as a precaution.

A series of eruptions in 2014 and 2015 disrupted international air travel to the Pacific archipelago for several days.