According to a spokesperson with the City of Duluth, the Aerial Lift Bridge was included in a write-up for the Governor's recommended $200 million for the Bridge Replacement Program. 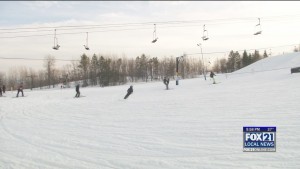 For Spirit Mountain, the Governor recommended $12 million in general fund cash to the City of Duluth “to renew, replace, and improve aged infrastructure.” The total cost of the project is $24 million.

For the St. Louis County Depot, Gov. Walz recommended $3.825 million to the County for infrastructure improvements “to the heating, ventilation, air conditioning (HVAC), and the mechanical, electrical, plumbing (MEP) systems; provide energy-efficient design and materials for long life cycle systems renewal (wall, and windows), and preserve the exterior shell integrity of the structure.” That project will cost a total of $9.15 million.

The County was also recommended to get $600,000 on behalf of the St. Louis County Agricultural Fair Association to construct two buildings at the fairgrounds in Chisholm.

According to a spokesperson with the City of Duluth, the Aerial Lift Bridge was included in a write-up for the Governor’s recommended $200 million for the Bridge Replacement Program.

“Funding these larger bridge replacements can be challenging for the local agencies because of the size and cost of the projects and the local agency’s limited transportation resources,” the Governor said in the write-up.

Lake Superior College was recommended to receive $1.055 million in bonds “for design of a new integrated manufacturing workforce lab. The Lake Superior campus currently rents space for this program. Once completed, this project will eliminate $2.8 million in deferred maintenance.”

A full list of the Governor’s recommendations by entity and project can be found here.