DULUTH, Minn. – Duluth’s fire chief and its top homeless advocate reacted to Wednesday’s homeless encampment fire under I-35 near downtown — almost three months to the day since fire erupted in the exact spot from squatters.

“People find their way to have shelter, to try to stay warm, literally to try to stay alive at this time of the year,” said Shawn Krizaj, Duluth’s fire chief.

“Some people don’t come to the Warming Center even in these temperatures — that’s why they still are under the bridge for whatever reason,” said Deb Holman, homeless outreach coordinator for CHUM and the Human Development Center.

Nobody was injured in the fire Wednesday, but it’s again highlighting the serious homeless problem in Duluth as people tried to survive a new round of brutally cold air Wednesday night and as Duluth’s two homeless shelters have been at capacity lately. 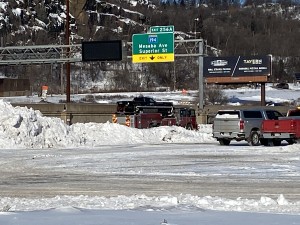 The fire broke out around 1:15 p.m. under I-35 near the Mesaba Avenue & Superior Street exit.

Crews arrived to thick smoke billowing from the location that had a similar fire at the homeless encampment Oct. 18.

A cause of this latest fire was under investigation Wednesday, but fire officials strongly believe it was started by people living there. They say witnesses reported squatters coming and going, and a mattress and other personal items were also under the ramp.

A MnDOT spokesperson said crews have been working with the city of Duluth and homeless advocates to clean up and help relocate people in the encampment since the October fire.

But Holman told FOX 21 the struggle is real, there isn’t enough affordable housing and it’s not an easy fix, especially with the volume of homelessness compared to available shelter in the city.

“I don’t think there’s bad people under there. It’s just, they would be fine if they came to CHUM or the Warming Center, but both places are packed at capacity. They probably just need a little breathing room,” Holman said.

The Warming Center inside the Rainbow Center near Tri Towers has a capacity of 49. The CHUM Drop-In Center can handle 80 to 100 people, according to Holman. The city and its partners are right now in the process of opening a bigger facility in Lincoln Park in February to act as the new warming center. Holman knows of at least 75 people who are living outside right now. 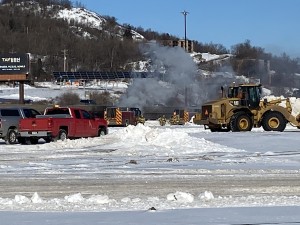 Chief Krizaj said the clean-up work under I-35 stalled when winter set in, but the mission continues to get people into better living situations.

“It’s concerning for all of us. We’re trying to put resources into it and try to get the people the help they need, but it is a challenge and there’s a lot of people working on it, whether that’s the city, MnDOT, St. Louis County or private organizations or religious organizations that are out there,” Krizaj said.

“MnDOT has been conducting clean ups in the encampment area and working with social service agencies to move the residents. The quantity of items and winter conditions have not allowed us to close off the area yet, and we are looking into long-term access control. MnDOT inspectors are currently assessing the bridge’s condition.”

Meanwhile, CHUM is in need of hand warmers, blankets, socks and gloves, especially the bigger kind for men because most of the gloves on hand right now are for smaller hands.

“The Duluth Fire Department encourages those in need of shelter to use the services at CHUM located at 125 North 1st Avenue West. CHUM’s Drop – In Center is open 24 hours a day. The Warming Center is also available between the hours of 8:00 p.m. and 8:00 a.m. at the Rainbow Center. The DTA is providing free rides to and from the Warming Center to anyone in need of temporary shelter.”