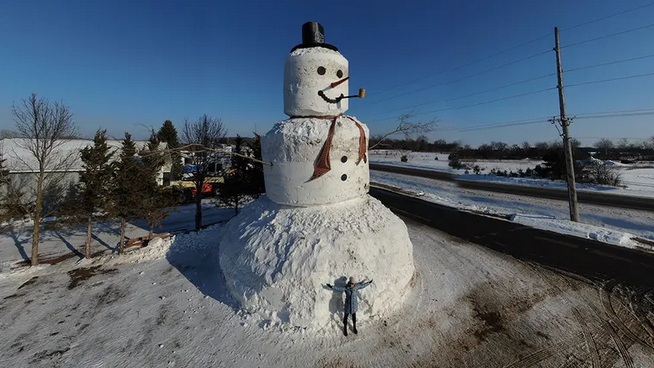 MILLTOWN, Wis. (FOX 9) – With arms made out of actual trees, a smile made out of saw blades and a pipe made out of a five-gallon bucket this super-sized snowman is turning heads and drawing people to Milltown, Wisconsin.

“We all enjoyed it so much the first year we kind of progressed,” Carlson said.

The Carlson’s got permission from nearby businesses to collect and use snow plowed off their parking lots. Using construction equipment to lift the snow, Carlson, his sons, and other friends and family used plywood to make molds for the snow. With three separate pieces about 14 feet high apiece, they built a 40-foot tall, solid snow structure with a four-foot, homemade top hat on top.

“I don’t really consider it work because it’s just a really fun thing to do,” Carlson’s son Hunter said.

Since the family completed the snowman this weekend, they say they’ve had dozens of people stop and take photos.

“We have a lot of people that stop. Yesterday we had probably 50 people drive through and take pictures,” Carlson said.

The snowman has become so popular, the Carlson’s have decided to start taking donations to give to their local community club. That club is celebrating its 75th anniversary next year and is trying to raise money to put on a fireworks show.

You can find this giant snowman in Milltown, Wisconsin, in Polk County, just over an hour outside the Twin Cities at Carlson Construction off Highway 35.