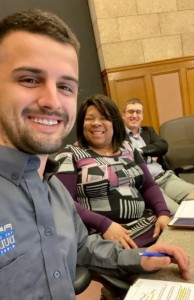 Derek Medved at his first city council meeting in 2020

DULUTH, Minn. – At-Large Duluth City Councilor Derek Medved has decided he will be leaving his term two years early to focus on his growing business, FOX 21 has learned.

“I have things on the horizon I need to focus on for business,” Medved said in a statement to FOX 21. “Growth has always been a focus for our company and it has taken a major turn in the past year, leaving me with more of my focus on work.”

Medved, 25, owns a chain of KornerStore locations in the Northland, which began in 2016 when he opened his first store in Gary.

“I want to ensure that my level of public service to my constituents is top notch, and I feel like now is the time to step down, before our growth,” Medved said.

Medved said his last day will be the Feb. 14th council meeting.  His term lasts through January 2024.

Duluth Farmers Market Back Open for the Summer