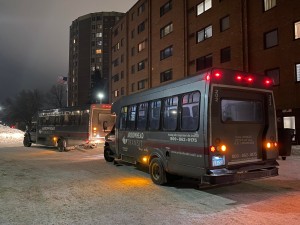 VIRGINIA, Minn. – More than 100 residents of two apartment buildings in Virginia were evacuated Wednesday because of a boiler problem that supplies heat, according to the Northland FireWire.

The Columbia and Rouchleau buildings evacuated around 150 residents.

Arrowhead Transit buses were called in to transport people to the Iron Trail Motors Event Center in Virginia for shelter, while local hotels and motels offered some rooms to those displaced, according to FireWire.

To make matters worse, a water line break in the area was hampering efforts to fix the boiler problem Wednesday evening, according to the Virginia Fire Department.

FOX 21 will update this story as more information becomes available.