The protest on Saturday follows a car caravan rally on Friday night rallying against the shooting. 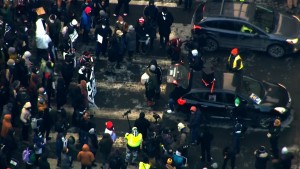 MINNEAPOLIS (FOX 9) – Dozens of people are gathering in Minneapolis on Saturday to protest the deadly shooting of Amir Locke by Minneapolis police.

The protest is currently underway outside the Hennepin County Government Center. Locke was shot and killed as police executed a “no-knock” warrant last week. Bodycam video shows police charging into an apartment on Marquette Avenue early Wednesday morning as part of an investigation into a murder.

Locke, who wasn’t named on the search warrant, was sleeping on a couch as police charged in. In a matter of seconds, Locke is shot and killed by officers. Police say Locke had a gun on him. However, attorneys representing Locke’s family point out he was a legal gun owner, and had little time to try and understand what was happening before he was shot and killed.

FOX 21’s Sister station FOX 9 was livestreaming the protest Saturday. You can find that video here.

The protest on Saturday follows a car caravan rally on Friday night rallying against the shooting.