Katie Vesterstein, a division one alpine skier for Utah, lived in Duluth until she was 10, when she decided to pursue ski racing further.

DULUTH, Minn. — Many skiers around here grow up on the trails of Spirit Mountain or Mont du Lac, but one former Duluth native is taking her alpine talents to the 2022 winter Olympic Games in Beijing.

Besides John Shuster, another Olympian with a Duluth connection walked the grand stage in Beijing.

Katie Vesterstein, a division one alpine skier for Utah, lived in Duluth until she was 10 when she decided to pursue ski racing further.

And now, years later, she is making an appearance in her first Olympic games.

“For me, it’s always been my dream, so getting this opportunity is something I’ve been looking forward to my whole life.” Katie Vesterstein said.

We caught up with Katie, currently in the mountains north of Beijing, with her father Kirk, former owner of Continental Ski Shop in Duluth, who was more than 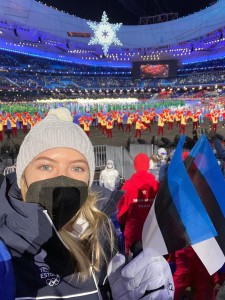 happy to go with her.

“I think it’s great to be with my daughter and I’m helping any way I can and yeah it’s just amazing,” Kirk said.

Katie says one of the highlights of the games so far has been the opening ceremony. She walked out with athletes from Estonia, the country she is racing for, because of her dual-citizenship.

“It didn’t even feel real for a bit, it was just so cool walking into the stadium with all these people and everyone there to compete and do something as a whole from all parts of the world and just being on the world stage in front of everyone and having family back home cheering me on is something that was really special,” she said.

A couple of years ago, Katie had to decide whether to ski for the U.S team, or go to college. She wanted to do both, which led to her decision to ski for Estonia.

“The Estonian team would allow me to do that and in addition to rep a small country that’s really passionate about winter sports is something that was really unique to me,” she said.

Katie starts competing for gold in her first race on Monday, February 7th.