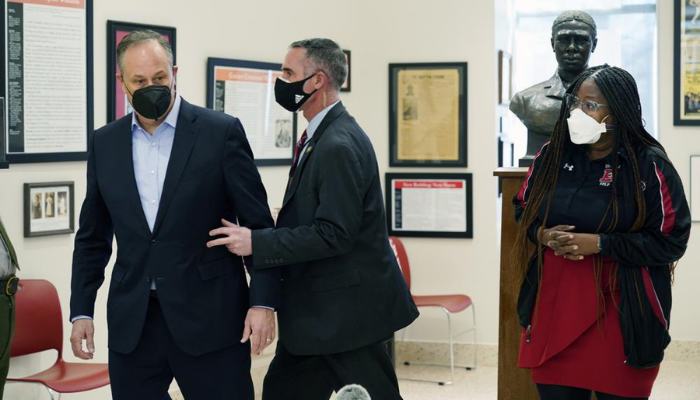 WASHINGTON (AP) — Doug Emhoff, the husband of Vice President Kamala Harris, was whisked out of an event Tuesday at a Washington high school by Secret Service agents following an apparent bomb threat.

Emhoff was at Dunbar High School for an event in commemoration of Black History Month. He was in the school’s museum for about five minutes before a member of his security detail approached him saying, “We have to go.” Emhoff was removed from the building into his waiting motorcade.

Students and educators at the school were instructed to leave the school, with an announcement saying, “Evacuate the building.”

District of Columbia Public Schools spokesman Enrique Gutierrez said there was a bomb threat. It was not known if it was related to Emhoff’s visit or the Black History Month event.

“U.S. Secret Service was made aware of a security threat at a school where the @SecondGentleman was meeting with students and faculty,” Peters added in a later tweet. “Mr. Emhoff is safe and the school has been evacuated. We are grateful to Secret Service and D.C. Police for their work.”

The Secret Service did not immediately respond to a request for comment.

Students at the school were dismissed for the day since it was expected to take several hours for security officials to sweep the building, principal Nadine Smith said.