Last week, Guinness World Records confirmed the Trapps were the tallest family in the world with an average height of 6 feet 6 inches. 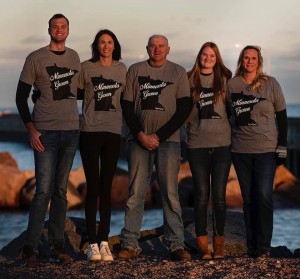 From left to right: Adam. Savannah, Scott, Molly, and Krissy

ESKO, Minn.- A family in Esko is reaching new heights, thanks to their height.

Meet the Trapp family —  Scott, Krissy, Savanna, Molly, and the youngest and only son, Adam.

“He likes to tease us that he carried the whole record on his back, the first thing he said when we had the family group text that we broke the record, he said ‘YOU ARE WELCOME’,” said Molly Steede, a teacher standing at 6 ft.-5.8 in.

On a virtual call Sunday from the South Dakota School of Mines and Technology, Adam Trapp defended his role in his family’s record break.

Last week, Guinness World Records confirmed the Trapps were the tallest family in the world with an average height of 203 cm — or about 6 feet 6 inches.

“It’s kind of blowing my mind a little bit like I don’t think I’ve completely wrapped my head around the fact that we actually have a world record, like the world,” said Savanna Trapp-Blanchfield, the 6 ft.-8.5 in. older sister. “It’s not just Minnesota, it’s not just the United States — it’s the world.”

The family said they beat the previous record-holding family by a whole 2 cm.

“Hopefully we can share a page with Eminem because my mom would love that,” Molly said. 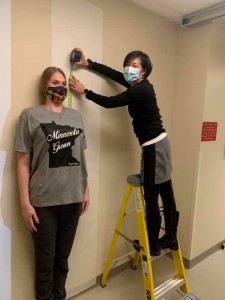 Dr. Ann Sudoh of Essentia climbs the step ladder to measure Molly back in 2020.

Determining they were the world’s tallest was definitely a tall task. They called on the family’s orthopedic doctor, Ann Sudoh of Essentia.

“And so we contacted her because Guinness needs someone to measure you who understands bone structure, understand how to measure people,” said Savanna. 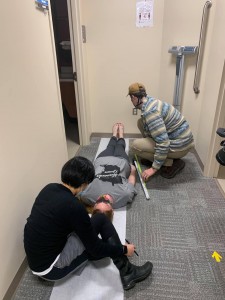 Dr. Sudoh measured the family length-wise on the ground, too.

And with the help of quite a few step ladders, a whole lot of measuring tape, and long white pieces of paper, the family was measured to the centimeter both standing up and lying down, 3 times during the day back in 2020.

Of course, unlike other world records holders, their height came to them naturally.

“We can give it to these 2 here, they created us,” Molly said gesturing to her parents Scott and Krissy. “They have the genetics, we’d be nothing without them. So they did something special, we were just born.”

“Always told them to be proud of their height and to be gracious to people that are staring or looking or asking for pictures or how tall they are. Just told them to always just be gracious, that’s something people look up to you for,” said Mom Krissy, the shortest of the bunch at 6 ft.-3.5 in.

But that wasn’t without its challenges.

“It’s tough when you go find clothes for them all and stuff like that,” 6 ft.-8.3 in. Dad Scott Trapp said. “You know when they’re growing up, grow out of shoes and clothes pretty quick.”

Growing up, Scott and Krissy’s kids played basketball and volleyball.

Their son Adam was quite accomplished on the basketball court at Esko High School, being named MVP among other accolades.

“Definitely I used my height advantage to my advantage quite a bit, for being able to go up and get some rebounds and get some shots stuff like that,” said Adam. “It was a lot of fun. My coach always said you can’t teach height”

But despite their literal “leg up,” the family says the kids went to every practice and all were 4.0 students. “Obviously when you’re tall you do stand out in a crowd but I think all of us did a very good job at being someone worth looking at,” Molly said.

“That’s always been my motto, if someone’s going to look at you and stare, be something worth staring at set a good example and show people where your heart truly is,” she said.

Now Molly is a teacher soon to get her master’s, Savanna works in social services, and tallest son Adam will graduate in South Dakota with a degree in biomedical engineering this May.

“All 3 of us, there’s just so much more to us than just our height,” he said.

“We got so much of a diverse background of education and life and everything like that, so it’s pretty important that people would realize that,” said Adam.

But now they can add worldwide recognition to their list of accomplishments. “It’s definitely going to be like on display in my classroom for sure, like ‘go read the book, Mrs. Steede’s in the book,’” said Molly.

A big moment as they keep climbing to new heights. “This is just another day in the life,” Molly said, “another day of ducking through doorways,” her sister Savanna replied.