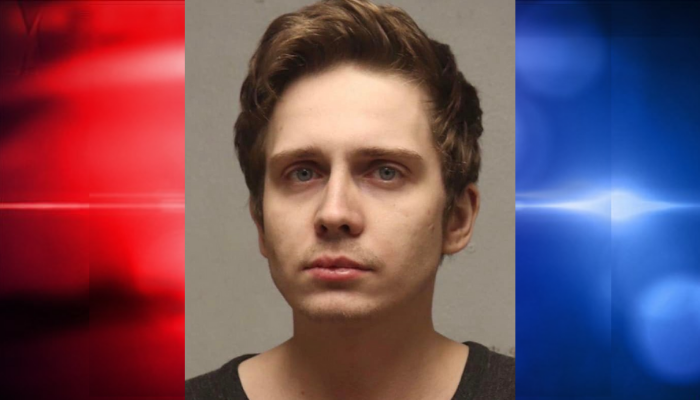 According to court records, 26-year-old Austin Nichols is charged with three counts of first-degree aggravated robbery.

The criminal complaint states officers responded to the first robbery around 6:39 p.m. on February 14 at the CVS Pharmacy on East Superior Street.

A female employee told officers that Nichols came into the store and walked around before approaching the side of the counter where she was working.

The woman asked Nichols if he had any questions when he pulled out a knife and demanded money.

The employee told police she gave Nichols between $100 and $200, and he left the store.

Authorities responded to a second reported robbery on Tuesday, February 15, around 7:35 p.m. at the Walgreens located on East Superior Street.

Reports stated that the suspect was a white male wearing an orange hat, black jacket, gray hoodie, jeans, and a black mask and had brandished a knife during the robbery.

Officers at the scene reviewed security footage of the incident and observed a male suspect grabbing a box of Cheez-Its, approaching the check-out counter, and then pulling out a knife in the direction of the cashier.

The cashier told authorities that the suspect demanded money, but she was locked out of the register.

He told her to close the sale and open the till, at which point she turned the screen to the suspect and “told him to do it.”

The suspect then took a pack of cigarettes and fled the store.

While officers were responding to the Walgreens robbery, a third robbery was reported at Jimmy Johns at the nearby Plaza Shopping Center.

An employee at Jimmy Johns gave officers a similar description to the Walgreens robbery suspect minus the orange hat and included the male suspect wearing shoes with green and red on the soles.

The employee said the male suspect approached the counter, asked what his favorite sandwich was, then took out his phone for a minute.

The suspect then pulled out a knife and told the employee to give him money from the register.

The employee told officers he asked, “are you serious” while calling for another employee to come up front.

The suspect then grabbed the tip jar and fled.

Because of the proximity of the robberies, officers believed they were looking for one suspect for both robberies.

A short time later, a male matching the suspect’s description was located on South Street near 16th Avenue East.

The male was identified as Austin Nichols.

During a search, officers located a black mask, an unopened pack of Marlboro 100’s, and small bills consistent with what would have been in the Jimmy Johns tip jar.

A review of surveillance footage from both the Walgreens and Jimmy Johns locations showed Nichols wearing the exact clothing, down to the tears in the jeans, that the suspect was wearing during the robberies.

Officers were also able to locate the knife used in the robberies.

Nichols is due back in court on March 15.