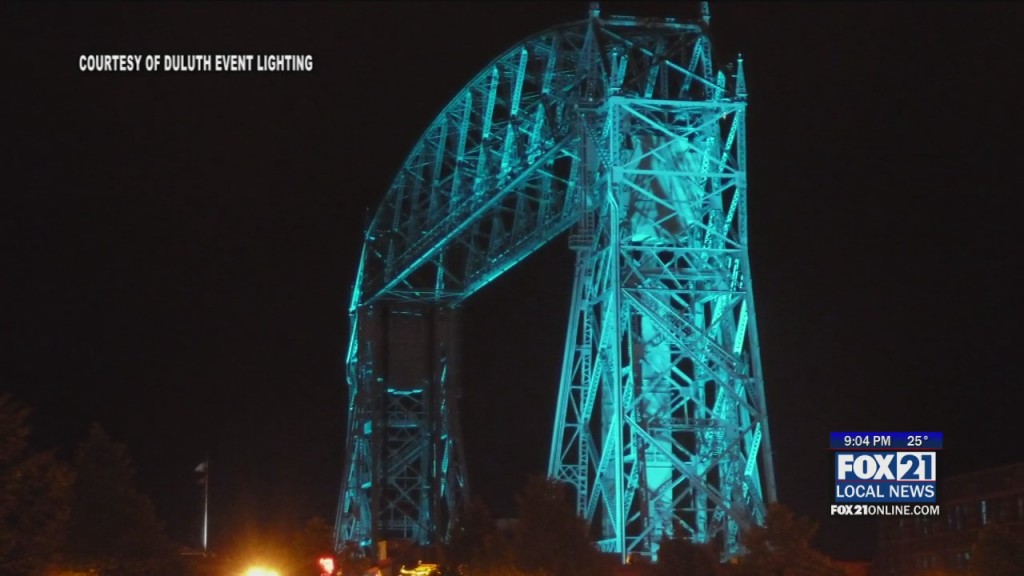 DULUTH, Minn. – On Monday afternoon, the City of Duluth provided a statement on the lighting policy for Duluth landmarks, particularly the iconic Lift Bridge after FOX 21’s stories Friday and over the weekend involving growing requests to light the bridge for Ukraine.

The full statement can be read below:

In response to recent requests regarding lighting of the Aerial Lift Bridge, the City wanted to provide information to the media and the public for additional context.

In March of 2020, light-emitting diode (LED) were installed that are expected to last for 22.5 years and save over $5,000 annually on energy costs. Changing to LEDs was intended to meet energy and financial efficiency goals of the City – goals which are being met. The ability for the lights to change color, or to be lit in favor of causes, was never the implicit, explicit, written, or spoken intent.

In a press release dated April 1, 2020, the City of Duluth said in a statement that “it would not be taking requests to light the Bridge.” The City made this decision after a large number of various types of requests ranging from stunts, to commercial use, and personal lighting inquiries were made which inundated staff but also endangered the intent and the value of the bridge – a working piece of public infrastructure that serves pedestrian, vehicle, and maritime traffic.

In 2013, the City Council passed a resolution 13-0023R entitled Resolution Regarding Alteration of Aerial Lift Bridge Lighting. The resolution “requests city administration establishes a policy for the review and implementation of requests by organizations to alter the lighting of the Aerial Lift Bridge.” The current administration found an outdated policy included a process that was done before the LED lights that were installed, which now does not require the approval of the U.S. Army Corps of Engineers and a written insurance agreement.

“We all know why people want to utilize or light the bridge for the issue that is impacting or an idea that is motivating them – it’s a structure that is iconic and memorable; on the state and federal historic registry for national significance, the Bridge that lets you know where you are,” Duluth Mayor Emily Larson said. “For these same reasons, the City has chosen to make the bridge off-limits for personal life events, political, financial, commercial or causal gain.”

Enger Tower, another unique, iconic structure representing Duluth, was lit in blue and yellow over the weekend in solidarity with Ukrainians. In regards to the ongoing conflict in Ukraine, Mayor Larson issued the following statement:

“I understand the emotional toll the invasion of Ukraine is having on people around the world, and I unequivocally, with my whole heart and being, condemn the attack by Russia. In a time when I know we are all searching for what we can do in support of those who are suffering, lighting is one thing we can choose to focus on. But I humbly suggest we direct our collective energy and individual financial capacity towards donations and efforts to support the Ukrainian people and prepare ourselves for the opportunity to be a welcoming home for future refugees who may need us.”

The City of Duluth values the Lift Bridge and Enger Tower. They both are a part of our history and have been used to highlight causes important to City Administrations and Duluth residents alike. It is also vital to protect both structures from politicizing and conflict. The City looks forward to creating a new lighting policy that reflects these values and will share it with the public in addition to a process for lighting Enger Tower once it has been approved internally.