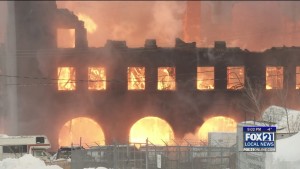 SUPERIOR, Wis. – The Superior Fire Department has ended its investigation without a cause of a massive January warehouse fire that took down two historic buildings on the city’s North End near the Blatnik Bridge.

Camron Vollbrecht, battalion chief for the Superior Fire Department, said investigators were able to determine the fire appears to have started in the northern half of the first flood of the Sivertson Fisheries Building at 1507 N. 1st Street.

Interviews with witnesses, security camera footage, and reports from firefighters first on scene were able to determine where the fire started, but not how it started because of the extensive damage from the intense flames.

“The cause of the fire will remain undetermined and the investigation is considered closed unless additional evidence or information becomes available,” Vollbrecht said.

Nobody was injured in the fire.