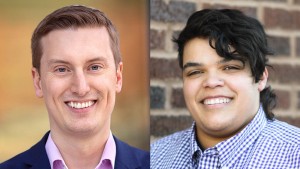 Both candidates are running for the seat currently held by District 7A Rep. Jennifer Schult, DFL.

Due to redistricting in the state, the seat will now be District 8B.

“Serving the people of Duluth on the City Council has been the honor of my life. I am thrilled to announce my campaign to serve District 8B residents in a new way and hope to earn the opportunity to work tirelessly for them in the Minnesota House of Representatives,” said Forsman.

Forsman was first elected to the city council in 2018. He is the current Duluth City Council president and chairs the Committee of the Whole.

Ellison was born and raised in Minnesota and currently calls the Lakeside neighborhood her home. She is a career counselor in the City of Duluth’s Workforce Development Department and serves as an inaugural African Heritage Commission member.

Both Forsman and Ellison’s announcement comes shortly after Rep. Jen Schultz announced she would not be seeking reelection. She is currently serving her fourth term representing Duluth in District 7A.

Nurses of the MNA Vote On Possibility Of Authorizing Strike