Mayor’s ‘State Of The City’ To Return In Person, City Council Meetings To Follow 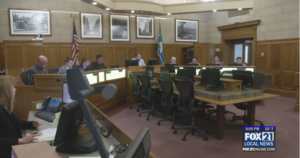 DULUTH, Minn. – Duluth Mayor Emily Larson will hold her State of the City Address Tuesday, Mar. 29 in the Harbor Side Ballroom at the DECC.

The meeting will have limited seating for the public, but the city is encouraging everybody to wear a mask.

Council President Arik Forsman is also expected to speak, among other guests.

Meanwhile, city council meetings are coming back to the council chambers starting April 7 after being remote on Webex for around the past two years during the pandemic.

But a city spokesperson says the city is working to make council meetings a hybrid model in the near future to give residents better access to the council who might not be able to make it to a meeting in person.

The city is working out those logistics.