No explosive device was located after an extensive search by authorities.

ESKO, Minn. – Some scary moments unfolded for more than 1,000 students and staff at Esko Public Schools Wednesday after a bomb threat at the High School. 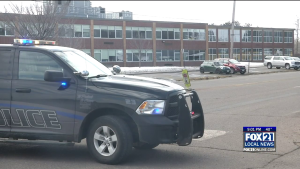 The threat was called in to the Carlton County Sheriff’s Office around 12:50 p.m. The anonymous 911 caller said an explosive device was seen in an Esko High School classroom, according to authorities.

The sheriff’s office notified the district, and emergency response protocols went into effect.

Students and staff safely evacuated to St. Matthew’s Church nearby as law enforcement from the sheriff’s office, Cloquet Police Department and a half-dozen other agencies moved in, including the Duluth Police Department’s Explosives K-9.

Students were kept inside the church for roughly two hours, away from concerned parents who began lining up to pick up their kids while not really knowing what was going on. 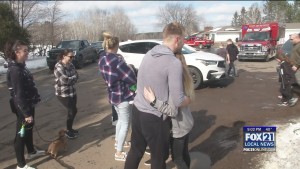 In the end, no explosive device was located after an extensive search by police.

Students were released during the 3 p.m. hour.  Some could be seen going straight into the arms of their parents, thankful the threat was nothing more than a prank and not the real thing seen too many times across the U.S.

As of Thursday evening, there were no arrests.

The Carlton County Sheriff’s Office continues to investigate and is asking anyone with information to call 911.

Authorities say a threat with purpose to terrorize another or cause a public evacuation is considered a felony and punishable of up to five years in prison.

Whoever threatens, directly or indirectly, to commit any crime of violence with purpose to terrorize another or to cause evacuation of a building, place of assembly, vehicle or facility of public transportation or otherwise to cause serious public inconvenience, or in a reckless disregard of the risk of causing such terror or inconvenience may be sentenced to imprisonment for not more than five years or to payment of a fine of not more than $10,000, or both. As used in this subdivision, “crime of violence” has the meaning given “violent crime” in section 609.1095, subdivision 1, paragraph (d).