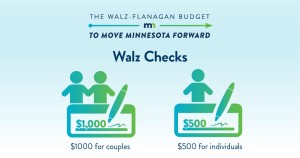 ST. PAUL, Minn. (AP) – Gov. Tim Walz has released an updated plan for how to spend the state’s enormous budget surplus, including a proposal for income tax rebate checks of $1,000 per couple.

It formalizes an idea he floated then for tax rebate checks of $500 for single filers and $1,000 for married couples.

Senate Republicans are pushing to use most of the surplus for permanent income tax cuts, while House Democrats want to target the money toward lower-income Minnesotans and social programs.