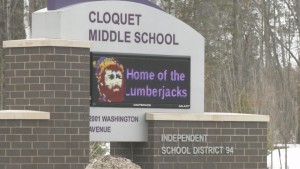 According to a spokesperson with the department on Wednesday, 2 staff members reported getting emails indicating the school was targeted for a possible school shooting on Thursday.

Officers immediately began investigating the source of the threat.

As of Friday the spokesperson said, they’ve interviewed multiple people but no one has been arrested.

On Thursday, authorities had an increased presence at all Cloquet Schools as a precaution.

When asked if the threats were in connection to the Esko High School Bomb Threat also investigated Thursday, Randall said “We have also learned that there were similar threats, believed to be from the same unknown source around the state that ended up being unfounded. We’re continuing to work to identify the perpetrators at this time.”