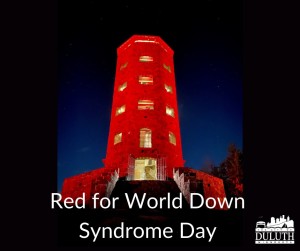 This is the 10th anniversary of the day, which was created by the United Nations.

There are roughly 4,200 Minnesotans with Down syndrome.

The Minnesota Department of Public Health estimates that 116 babies are born with Down syndrome each year, which involves an extra 21st chromosome.

Meanwhile, the city of Duluth is currently developing a new lighting policy for requests on Enger Tower and the Lift Bridge.  Until then, Enger will only be lit for requests that have already been on the books.