The U.S. Coast Guard is monitoring the situation but has not seen any environmental impacts, according to officials. DULUTH, Minn. — The U.S. Coast Guard is investigating after a retired tugboat partially sunk in the Duluth Port Monday morning.

At this time, there are no reports of any pollution impacts to the environment, according to Lt. Joseph McGinnis, with the Coast Guard.

McGinnis said the partial sinking was reported around 9 a.m. near the Compass Minerals dock off Railroad Street. 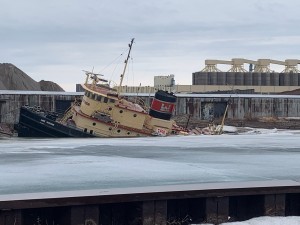 Crews were sent out to monitor the situation while a de-watering operation began.

As of 3:45 p.m., the vessel’s stern remained under water while the icy water helped keep it stable, according to McGinnis.

The vessel, which was built in 1943, used to be owned by the U.S. Army Corps of Engineers until it was retired in 1995 and acquired by the Duluth Entertainment Convention Center as a floating museum, according to Great Lakes Tugs & Workboats.

The tug was sold in 2007 to Billington Contracting of Duluth and listed as inactive, according to Great Lakes Tugs & Workboats.

A cause of the partial sinking is under investigation.

For a live look at the tugboat from DuluthHarborCam.com, click here.