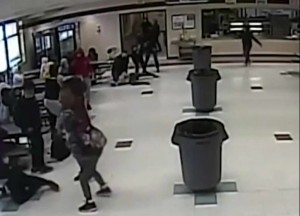 MADISON, Wis. (AP) – A Wisconsin father is demanding that prosecutors charge an off-duty police officer who appears to have briefly pressed his knee into his 12-year-old daughter’s neck similar to how Derek Chauvin restrained George Floyd.

Surveillance video appears to show off-duty Kenosha Police Officer Shawn Guetschow press his knee into Jerrel Perez’s daughter’s neck for about 25 seconds while he was breaking up a fight at her middle school on March 4.

Perez has threatened to sue and has demanded prosecutors charge Guetschow, posting photos on Facebook of Guetschow on top of his daughter next to a photo of Chauvin restraining Floyd.