DULUTH, Minn. – Environmental concerns are growing involving that partially sunken retired tugboat in the Duluth Harbor. This comes as at least a gallon of oil has leaked out into the slip’s water, according to the Duluth Coast Guard.

“We do now have some sheening from the vessel. And that’s where we have the contractor putting sorbent material in the water and around the vessel,” said Frances Smith, a commander with the Duluth Coast Guard. 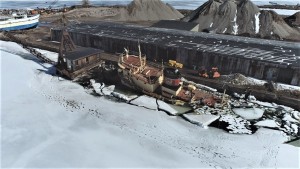 Smith on Thursday said the oil is contained to the slip off Railroad Street, and officials believe the fuel tank remains secure.

But we’ve learned the removal process of thousands of gallons of fuel and oil inside the vessel has not yet happened because the boat is being weighed down by 6 to 8 feet of ice inside the engine room from what’s believed to be a breach in the haul under the water.

Drone video by FOX 21 showed the tugboat “Lake Superior” looking much like it did on Monday when it was first reported to be going under water.

Smith said the Coast Guard is working with federally certified contractors to mitigate the situation, which has most recently been placing white square sheets around the boat designed to soak up the oil. 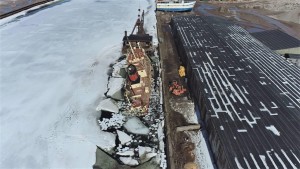 “It still has a pretty good potential to spill. At this time while it’s sunk like that, we’re unable to access the fuel tanks to remove the fuel,” Smith said.

There are roughly 7,500 gallons of fuel and oil in that tugboat, according to Smith.  And while ice can sometimes be a hindrance to a clean-up effort, Smith said the ice is actually helping to contain oil within the stern of the vessel.

Smith expects curtain booms to soon be placed around the vessel for extra protection until that ice inside the engine room is melted.

“We do train on this, pretty regularly, going through the response, and working with the contractors. They are certified contractors. They have agreements with the government. And they do this all over. This particular company is from Detroit, Michigan. They are well equipped,” Smith explained.

Smith expects to continue daily on-site visits to continue well into next week as conditions change. She says the Coast Guard’s focus is on the environment. Once the boat is safely back on water and all contaminants are removed, their job is done and the private owner of the retired 1940s tug is left to deal with what’s next.