The Deputy was still in the car when the suspect allegedly rammed into him. Law Enforcement said he later headbutted the Babbitt officer. 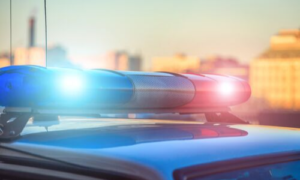 KUGLER TWP, Minn.- A 47-year-old man was arrested Friday using “less lethal” tactics after an alleged vehicle chase and violent encounter with a Babbitt Police Officer and St. Louis County Deputy, which left them both injured.

According to a spokesperson with the St. Louis County Sheriff’s Office, the Deputy tried to perform a traffic stop on Wahlsten road for suspicious behavior.

The Deputy opened his squad door and started giving verbal demands, when the truck accelerated into reverse and rammed his squad car, with the Deputy still inside.

The truck then fled, the spokesperson said, and the Deputy tried “a couple of unsuccessful” Pursuit Intervention Techniques or “PIT” maneuvers.

A Babbitt Police Officer deployed stop sticks on Hwy 21, and the truck stopped after driving on damaged tires for a 1/2 mile.

The driver exited and held a screwdriver as a weapon. According to the spokesperson, even after verbal commands and holding the suspect at gunpoint, he continued to approach the Deputy with the screwdriver.

It was at this time the Babbitt Police Officer successfully deployed his taser and the suspect fell into the ditch.

As authorities tried to put handcuffs on the suspect, according to the spokesperson, he resisted and fought with both, grabbing at the Deputy’s groin and gun belt and headbutting the Babbitt officer.

With the help of additional law enforcement, the suspect was safely secured in handcuffs.

Investigators learned the suspect was using a Law Enforcement scanner on his iPhone during the incident and had an active Wisconsin Department of Corrections warrant for his arrest.

The Deputy was treated for an injury to his hand, and the Babbitt officer’s face was injured from the headbutt. The suspect was treated for no specific injury as a precaution and released from Essentia Health in Virginia without incident.

According to the St. Louis County Sheriff’s Office spokesperson, “although deadly force options were justified numerous times during the incident with this suspect, the two law enforcement officers chose less-lethal tactics and options.”

The Male suspect was booked into the Virginia jail for 2nd-degree assault, 4th-degree assault, 1st-degree damage to property, 5th-degree possession, Flee in an MV, Obstructing with force “attempting to disarm a police officer”, Use of police radio during a commission of a crime, 4th degree DUI, Possession of metal knuckles, reckless driving and driving after revocation.